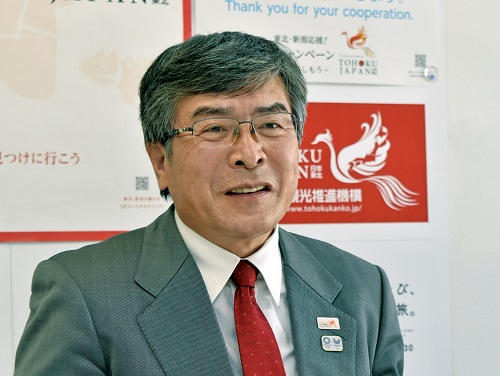 The Tohoku Tourism Promotion Organization, which was established in June 2007, has been engaged in various activities to promote the tourism industry and economic development in Tohoku. This year, which marks the 10th anniversary of the Great East Japan Earthquake, we are focusing on the "Tohoku Destination Campaign (Tohoku DC)", a tourism campaign that disseminates Tohoku, which has abundant tourism resources such as food, history, and nature, both domestically and internationally. From April 1st to September 30th, local governments in the 6 prefectures of Tohoku, tourists, and transportation such as the JR Group will work together to promote the appeal of Tohoku.
Currently, while observing the infection status of the new coronavirus, we are developing promotions that incorporate the perspective of microtourism, such as going out around us. In addition, more than 200 contents have been prepared as a special project, and many are registered as "TOHOKU supporters" from inside and outside the Tohoku region. I would like to express my gratitude for the reconstruction assistance of the Great East Japan Earthquake by letting me see the energetic appearance of Tohoku through Tohoku DC.

At this Tohoku DC, we are planning a "Digital Tour Stamp Rally & Coupon" to collect stamps digitally in 6 prefectures of Tohoku with the participation of NEXCO EAST. In addition, we will sell the "Tohoku Sightseeing Free Pass", which is convenient for visiting tourist spots in the Tohoku region, and the "Tohoku MONO" corner, which sells Tohoku regional products at the SA / PA of Expressway. In addition to the installation, information related to Tohoku DC is posted on the information site operated by EXCO East Japan, which has greatly contributed to PR.
In addition to these activities, by exhibiting at the booth of the annual event "Japan Tohoku Yuraku Day" in Taiwan, Expressway tour discount product "Tohoku Expressway Pass" for foreign tourists visiting Japan and Expressway SAPA We are cooperating not only with domestic tourists but also with the promotion of inbound tourists, such as introducing the gourmet foods of Taiwan.
Tourism is a broad-based industry, and our efforts alone have limited potential for development. However, by collaborating with NEXCO EAST Group in this way, new ideas are born, and we are expecting great effects such as building new sales channels and realizing multi-layered PR.

While the convergence of the new coronavirus is still unclear, the tourism industry is at a major turning point, and we will continue to create new travel styles such as long stays in the Tohoku region that leverages the strengths of Tohoku such as nature and hot springs. .. We also have to work to Large inbound demand in the near future. "All Tohoku" in collaboration with a wide range of organizations and companies toward the nationwide goal of 60 million foreign tourists visiting Japan in 2030 and a total of 130 million foreign guests staying in rural areas. Efforts are becoming more and more important. We will continue to work to attract tourists to Tohoku and revitalize Tohoku in the future through cooperation between the tourism industry and Expressway