Transportation between Saitama and Chiba (Tohoku Expressway Expressway east Kanto Expressway) was via the city center (capital expressway), but on the June 2, 2018 outer ring road (Misato Minami IC-Takaya JCT) With the opening, about 80% of the traffic has been converted to the outer ring road. Also, due to the opening of the outer ring road and the conversion of four lanes such as the Horikiri JCT to Kosuge JCT, the traffic congestion loss time at the Tokyo Metropolitan Expressway inside the central ring (including the central ring) has been reduced by about 30%.

Changes in routes and traffic conditions before and after opening 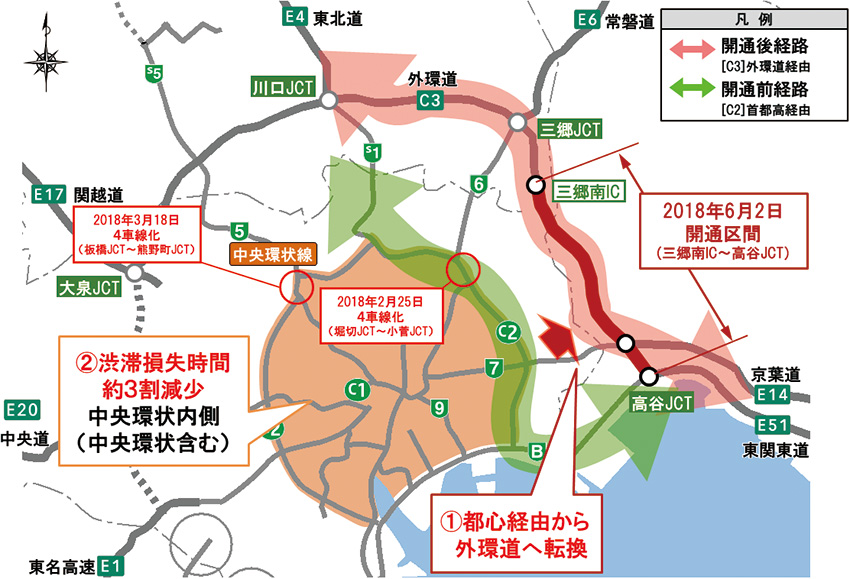 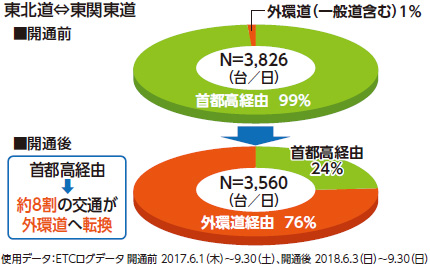 [2] Changes in traffic congestion on the central loop line 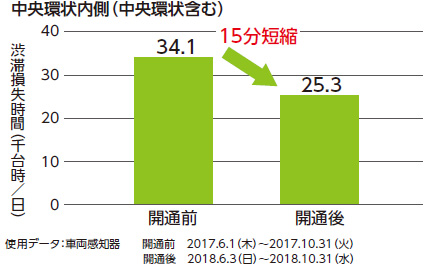 SHIRIBESHI EXPRESSWAY (Yoichi IC-Otaru JCT) was opened on December 8, 2018, and the emergency medical system in the Shiribeshi area was strengthened, such as shortening the transportation time to the tertiary medical facility for severe patients. It is hoped that this will contribute to a safe and secure life in the area. 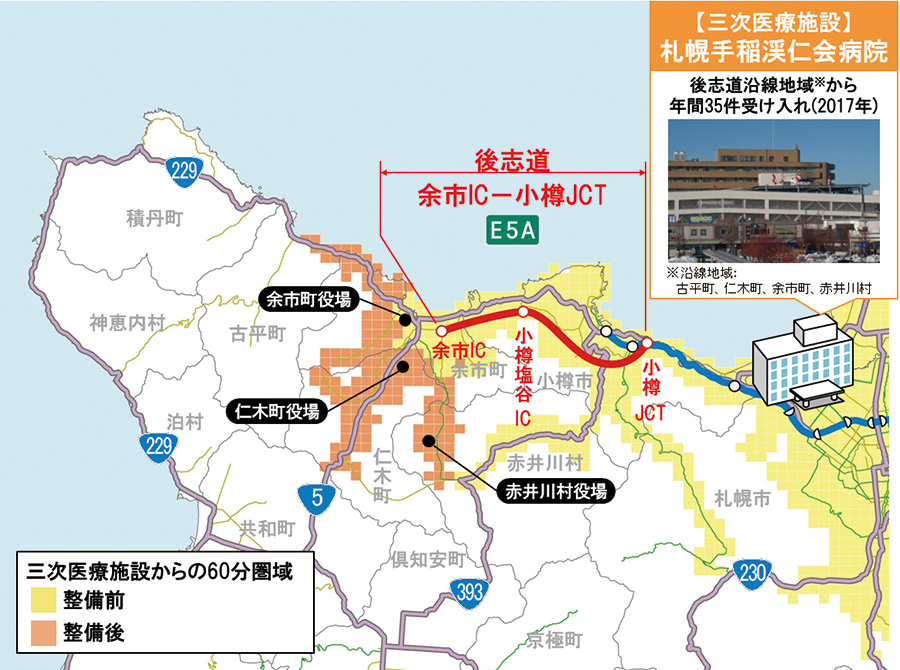 Implementation of measures against animal invasion

At locations where the planned route passes through a region rich in nature, an intrusion prevention fence is installed to prevent collisions with passing vehicles due to invasion of deer, and a flight guidance pole is installed to guide the movement route of birds. The we.

24.4km from Nanyo Takahata IC to Yamagata Kamiyama IC on the Tohoku Chuo Expressway, which connects major cities in the inland areas of Fukushima, Yamagata and Akita Prefectures, was opened on April 13, 2019.

Around the Tohoku Chuo Expressway, hot springs and other famous tourist spots nationwide are located.
Due to the development of the Tohoku Chuo Expressway, it is expected that the convenience of access between tourist destinations will be improved, and tourism promotion such as the increase of tourists from inside and outside the prefecture is expected, and wide-area regional exchanges.

In addition, with the opening of this road, a double network will be formed in the Yamagata, Fukushima and Sendai areas, and even if there is a suspension of traffic on any of the Tohoku Expressway, Yamagata, or Tohoku Chuo, each line will complement each other and move between areas. It has become possible.

The Joban Expressway Okuma IC, which has been working in cooperation with Okuma Town since the Great East Japan Earthquake, was opened on March 31, 2019.
In Okuma Town, a new government office building was completed after the opening of the Okuma IC, business operations resumed in the town for the first time in about eight years and two months since the earthquake, and reconstruction projects are accelerating even faster than before.
It is expected that the opening of the Okuma IC will contribute to the reconstruction of the region by boosting the speed of the reconstruction project and further improving the efficiency of transportation of the removed soil to the intermediate storage facility.

From April 2018 to April 2019, a total of 6 smart ICs (Oshu, Koriyama Chuo, Tamura, Nara, Hachinohe West, Takizawa Chuo) were newly opened in the Tohoku region.
Each smart IC is expected to greatly contribute to regional development by improving the living environment and convenience of local residents, supporting emergency medical care by shortening emergency transportation time, strengthening the foundation of economic activities by improving accessibility, etc. I am.

Rare plants were confirmed in the areas where the terrain was altered, but since the period of protection was before germination, the soil containing seeds was collected, and after the germination and growth at our group facilities, the environment was similar. I transplanted to the place to do.
To reduce the risk of extinction, we collected the seeds that were raised and stored them at the Shinjuku Gyoen Management Office of the Ministry of the Environment.

Since the planned route will be set up in an area where small animals such as reptiles and amphibians inhabit, we set up a sloping ramp in the waterway to secure a moving route.